1. How many injury cases get settled through mediation?

Before getting to know all there is about personal injury mediation, let’s check out these statistics estimated by the Department of justice on personal Injuries: 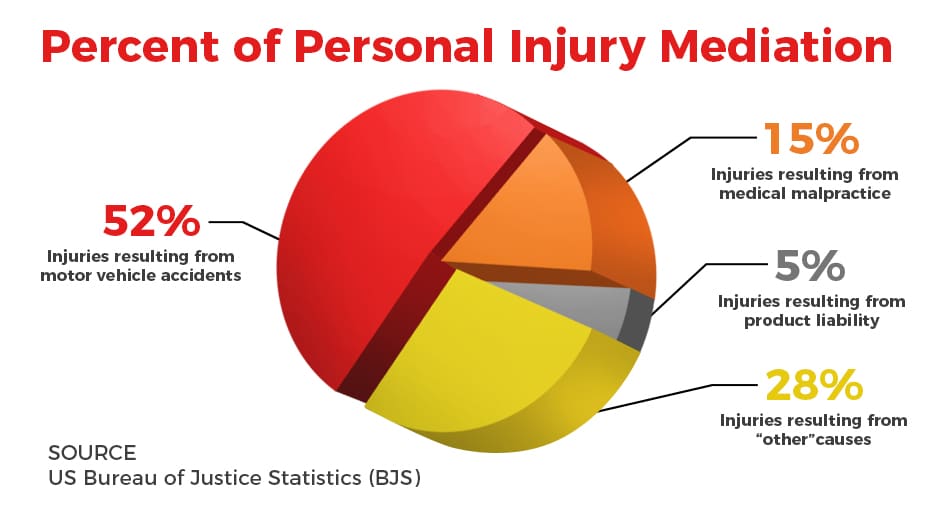 Although the number of injuries recorded is massive, very few of these cases eventually go through trial and that is because many of them go through Alternative Dispute Resolution (ADR) which is about 97%and got resolved. Injury cases are one of the issues that usually go through mediation with a very high success rate.

2.What is the meaning of mediation in a personal injury case?

Mediation is an alternative dispute resolution strategy usually managed by a professional called Mediator. Mediation is a less formal gathering where disputes on injury cases and claims are solved. The mediator makes sure the parties involved reach a consensus not forcefully but by structured deliberation.

Every party involved is given equal chance so that the mediation process does not tilt in favor of any party. Equal opportunity is usually given for all parties involved to express their concerns and give their position. This is why a mediator is usually hired to spearhead deliberations like this to help erase partiality and more disputes.

Did you get injured in an accident? We’ll get you the compensation you deserve.
NO FEE until we win! For a free consultation, call 248-591-4090 today!

3. Is it compulsory to go through personal Mediation?

Personal injury mediation usually will depend on your kind of case and location, sometimes even if you don’t want a mediation the judge could still rule order in favor of mediation if he/she believes it can get your case solved. Mediation can save you a lot of time and resources especially if you are willing to reach an agreement with the other party or parties.

4. How does a personal injury mediation meeting run?

5. Preparing for your personal injury mediation

Don’t go to a Personal Injury Mediation if you are not mentally ready for it. There is a lot to expect in meetings like this and you should be well prepared and aware of the possibilities in such a meeting. It will give you an edge if you’re ready.

Keep this in mind, that:

Some of the statements won’t go well with you

The opening statement is where it usually starts from. So, if opening statements are allowed, you’ll hear the attorney of the second party counterattack your attorney’s statement which is very much expected. So, don’t take offense, they are simply doing their jobs.

Only make sure you share your thoughts once it gets to your turn.

The first stage of the mediation will feel totally off

You will only reach a consensus through negotiation so don’t back off when your counterpart is offering a very low return for your injury. Your counterparts are expected to consider your initial offer to be very high and attempt to bring it further down. The idea is to find a middle place for you both to reach a consensus.

Mediation will still take some time to come out well, but not as time demanding as opting in for a trial.

The mediator in charge of your negotiation is neutral

A mediator won’t tilt towards any of the parties; you have your attorney to help you win your case. The mediator simply pushes the conversation of both parties in such a way that an agreement will be reached.

A Compromise must be reached

Once you know this, you’ll be ready to also let go to help maximize the possibility of reaching an agreement. Reaching any kind of consensus is always a give-and-take situation.

Early estimation shows that only 4% of personal injuries get to be tried. Most cases like this are usually better settled outside of the court to get a better outcome. Mediation is preferable by 96% of personal injury cases, and that’s a lot of figures there.

With the advantage of having a neutral party to help guide the negotiation, you are sure to be directly involved in the negotiation and also compromise.

Some of the advantages that personal injury mediation offers are:

Mediation sometimes can be mandatory as stated earlier because of the judges’ verdict. But it still doesn’t rule out the fact that when negotiation fails, mediation can easily suffice. And it is never done under duress.

Mediation had worked in time past and still does; the success rate is high so give it a try. To find a good mediator with the record, you can always check the official directory for more info.